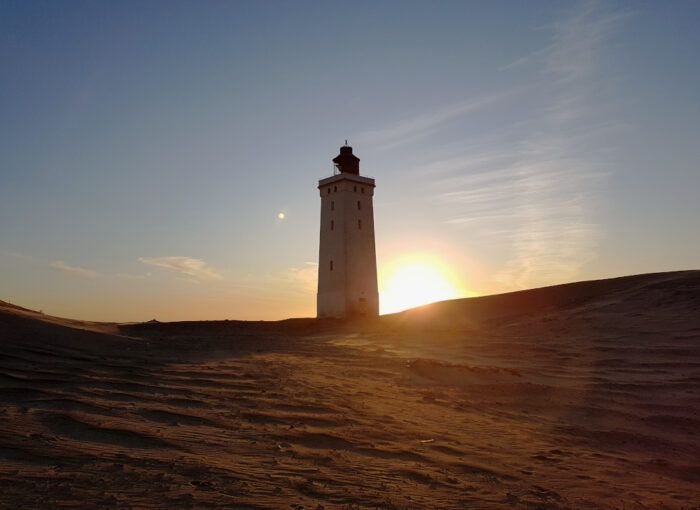 I wanted to write a story about how you move a 120-year-old, 700 tonne lighthouse 70 meters further inland by giving it roller blades… It turns out however to be impossible to tell you about Rubjerg Knude Fyr without also telling you about sand. And a tiny town in the north of Denmark where there seems to be an entire industry of people moving sand!

The west coast of Denmark is awesome!

Long stretches of white, sandy beaches, huge sand dunes partly covered in grass and small bushes. Big waves that thunder towards the coast and – piece by piece – eat the coastline.

For some reason though, it just does not seem that the people living along the coastline are willing to accept this!

The day I arrived in Lønstrup I walked down to the viewpoint to look at the ocean. A huge truck passed me on the way and as I arrive at the viewpoint, I see it parked on the beach – off-loading sand. “It can’t be”, I said to myself, but it was indeed a truck off-loading sand. At a (sandy!) beach. Big piles of sands where everywhere, and another truck soon arrived with more sand! In my world this is super weird! You go to the beach to GET sand. Actually transporting sand ONTO the beach is a bit like …. well; walking through a spring of crystal clear water to get to the supermarket to buy water…..

The next morning, I walked along the cliffs towards the lighthouse that started all this sand-fascination; Rubjerg Knude Fyr.

On the way to the lighthouse you pass an old graveyard. Some of the gravestones are still there but the church itself was demolished in 2015 as it came too close to simply dissappear into the ocean.

When the church was built in the early 13th century it was at the center of the tiny village, and the coastline was more than 1,2 km away! The erosion means that every year the ocean “eats” about 1,2 meters of the cliffs and dunes here!

It has been this way for centuries. For hundreds of years the villagers have watched the ocean move closer and closer to their church and still; in 1900 someone decides to build a lighthouse. 200 meters from the edge of the cliffs – in the middle of a HUGE sand-dune.

On December 27th, 1900 the light was turned on for the first time. For the next 10 years everything was perfect. However between 1910 and 1920 the area experienced some very big storms.

Sand moved around creating big sand dunes in between the lighthouse and the ocean, and as a result the light was hardly visible at sea.

In an efffort to stop the sand from moving, grass and bushes were planted but (big surprise) the sand still moved and just ended up on top of the grass making the dunes even higher.

The plants were removed again, and so was a lot of sand, but little did it help; the sand dunes just grew bigger and bigger and finally the lights were no longer visible at sea. The lights in Rubjerg Knude Fyr were turned off in 1968.

We all know that karma has a strong sense of irony and over the next 30 years the ocean actually did a great job getting rid of some of all this sand; it slowly ate its way into the soft sand and by 2019 the lighthouse was very close to the edge of the cliffs and about to fall into the ocean.

Thinking of all the sand they had moved around for generations to save this lighthouse (just imagine all those Christmas dinners where dad, granddad, great-granddad talks about moving sand…..) , the local people were NOT going to let the ocean eat their lighthouse! They decided to move it!

How to move a lighthouse

A local builder took the job.

First (of course) he moved a lot of sand. Seems to be the thing here….

Next followed a reinforcement of the foundation and finally rails were laid underneath the lighthouse in order for the construction workers to simply lift the lighthouse, place it on the rails and roll it inlands.

The simplicity of this solution is absolutely brilliant!

Of course it wasn’t simple at all, but just think about it: you have a 700 tonne lighthouse standing in soft sand – and you decide to roll it 70 meters futher inland!

Sorry for my ignorance!

Where this began with a bit of irony – with me making fun of people moving sand – it ends with admiration.

These people will not give up.

They put roller blades on their lighthouse to save it, and when the mighty ocean eats their coastline; they move sand to keep it.

You gotta love this place!

2 Comments on “Rubjerg Knude Fyr; how to move a lighthouse”