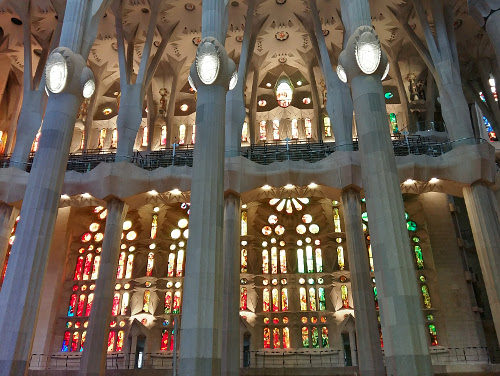 Most people go to Barcelona in summer time. And as lovely as that sounds Barcelona is also one of those cities that just keeps growing in popularity meaning more and more people flocking to the city leaving little room to breathe and just do what you want when you want it. I wanted to escape that and decided to go to Barcelona in January instead.

I’ll admit it was a bit cold. But coming from Denmark that wasn’t really a huge issue for me. And being there in January surely had its advantages.

However; here are a few things that (probably) won’t happen to you if you go to Barcelona in January:

No lines to get into Sagrada Familia

You probably won’t have to wait to get into Sagrada de Familia. You don’t even have to buy tickets in advance! I’m serious. I showed up – bought a ticket and entered 7 minutes later.

You’re probably not going to sit on La Rambla sipping cava. But for heaven’s sake; do sip cava! I really enjoyed El Nacional. I was travelling alone and it’s a great place to do people watching, it doesn’t feel awkward at all being on your own and they have nice food and excellent cava! http://www.elnacionalbcn.com/ I also really enjoyed La Pepita: http://lapepitabcn.com/. I came there early meaning I could sit by the bar and chat to the waitress a bit. It’s quite small but very nice and local!

You probably don’t have to choose which one if Gaudí’s many houses you want to visit. Chances are you can easily see them all without having to wait in any lines. Also; you won’t get boring photo of other people’s back or families or both – you have the place pretty much to yourself and get some amazing shots!

No swimming – or beach volley

You probably won’t swim in the Mediterranean Sea. You might not even be able to go to the beach! That’s what happened on my visit anyway. The winds were so strong they actually closed to beach. But I had a lovely long Sunday morning run with my guide from www.gorunningtours.com with hardly any people around.

No hiding in a big group on your running tour

Speaking of running; if you like running – and want to go on a guided tour; check out Go! Running Tours (www.gorunningtours.com). If you’re running with them in January you probably won’t meet a bunch of other runners though… (But then on the other hand you get to set the pace and ask as many silly questions as you want…)

In other words; if you want to escape the crowds and get some of that excellent Barcelona feeling I’d highly recommend going out of the peak season! If you go in January just remember to check that your hotel has some kind of central heating system. And bring a sweater – or buy one or two or… 😉